About 6 months ago I bought the Joey Hurdy LED 3x3x3 led Cube for the Arduino platform.  While soldering it together wasn’t easy, once I had the basics of the LED placement down it went pretty quickly.  Makershed.com has it on sale right now for under $10
http://www.makershed.com/products/joey-hudy-2-3x3x3-led-cube-arduino-shield

Just recently I got a pcDuino, which is a Linux based Arduino platform with the Inputs and Outputs of an Arduino UNO.  So the thought occurred to me, why not see if they work together.

So, I grabbed the code, which can be downloaded here:
https://jumpshare.com/v/URgEXYU9GrkOqMZgnhhb
Copied it to an USB flash drive and then loaded it in the pcDuino’s Arduino IDE, which is running 1.5.3 beta for Linux. 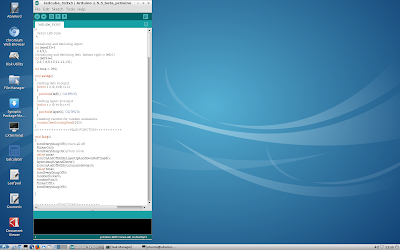 Once I uploaded it it did run, but I noticed something odd, it ran much faster on the pcDuino than on an actual UNO.  My thought on this is because the pcDuino is running at 1GHz there must be some timing issues that aren’t accounted for when running a a much faster processor.  I will need to research this some more.
This is a standard UNO with the Cube running.
This is the Cube running faster on a pcDuino.
If you have any insights that I haven’t covered please leave a comment below!
I have not been able to post blog updates as I would have liked to, this is due to some personal issues that we are having that should be taken care of in a few months time, at that point, hopefully blog posts will continue with some regularity.
Share!
Tweet