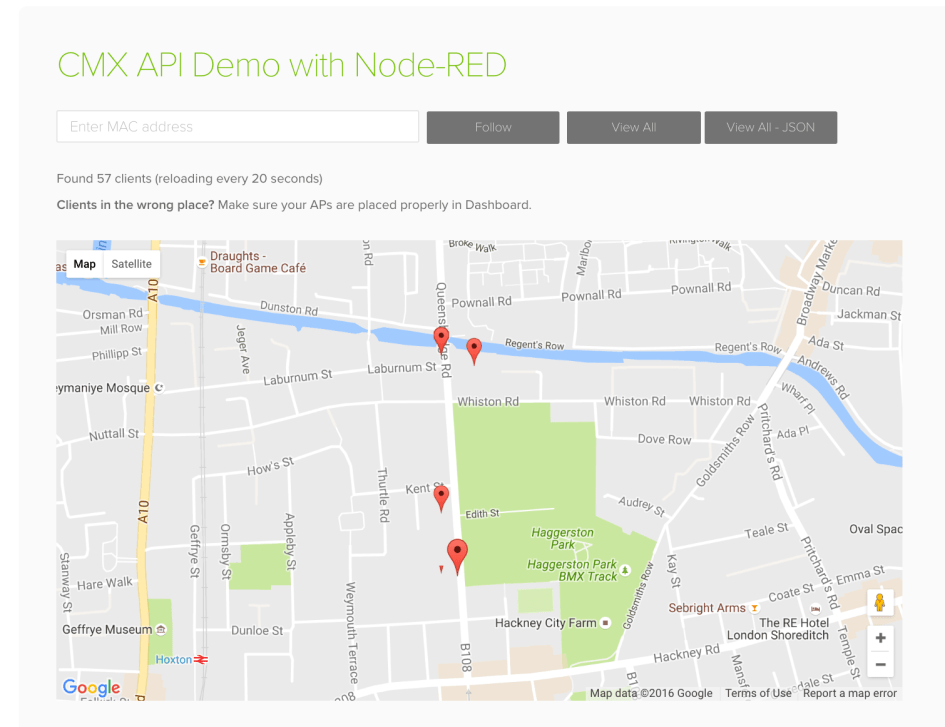 The IoL City would like to use their metropolitan free WiFi to better understand how the citizens move about the city. With this information, they can build smarter public areas, provide analytics for local services and trigger other forms of IoT automation.

How does Cisco Meraki CMX work?

All WiFi clients discover a wireless network (SSID) by sending a “probe request“. This is effectively a broadcast message emitted by the device (i.e. phone or laptop), which basically says “Hello! I want to join a network, my name is AA:BB:CC:DD:EE:FF”. In reality, the wireless access points in the area hear a broadcast message with a MAC address. At that point, the Meraki APs will log the time of day, MAC, signal strength and deduce some other bits of info like the manufacturer and operating system. The Meraki cloud will then combine this data with what other APs heard, to help triangulate the client with the help of GPS or X/Y coordinates on a map.

The Cisco Meraki Dashboard will retain this information in an anonymized way to generate helpful trend analysis for marketing research or event space optimization. Alternatively, Meraki can export the raw data feed to your own web service that will use that data however it’s needed.

For a complete explanation on this technology, check out this article.

As with all things IoT, security and privacy should be an important part of your final solution. If you are collecting this information in an unambiguous way, there should be disclaimers placed where the clients can be informed. This might be on a captive portal, or posted near the access points. Apple and likely Google will anonymize their MAC addresses during the probe request to prevent tracking of unaware clients. Only after the client has associated to a wireless SSID, will their MAC address remain consistent for accurate tracking. More information on security and privacy best practices can be found in a previous IoL article. 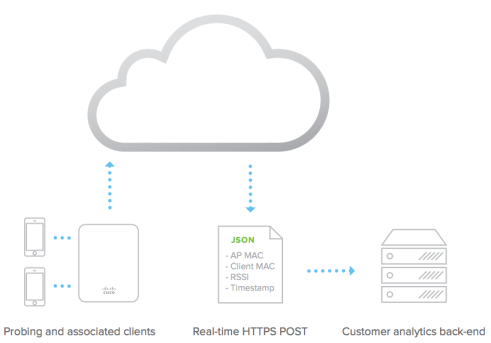 The Meraki Dashboard must be configured to point to your Node-RED service.

In addition, the Meraki APs should be placed on the map within the Meraki Dashboard.

A minimum of three access points are required for triangulation, but one will at least give you some proximity. 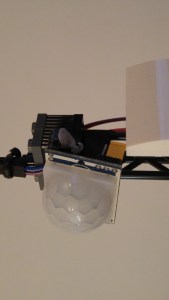 This device acts as the Internet firewall. Although it’s not a mandatory component, it makes it easy to provide secure access to the Raspberry Pi with a simple NAT rule and by using the built-in Dynamic DNS feature.

The CMX web services will be hosted on this small computer, running Node-RED. To make this information easy to work with, I personally built my own Node-RED “node” to accept the JSON feed provided directly from a Meraki wireless network. I’ll go into the details of building that in a future post.

(Note: I’m running this flow on a Raspberry Pi, so NodeJS and Node-RED are installed by default)

I’ve created a few example flows to demonstrate the power of this new IoT data stream.

In this example, I have attached a “switch” node, which I named “Search Clients. This will look for either a MAC address or machine name to determine the next flow path. If an “Apple” device was found, I simply send a message “Apple device found!” to my debug screen. If my personal phone’s MAC address was found, it will trigger a message “Welcome Back”. If the device has not been seen for 5 minutes, it then sends a message “We Miss You!”. Although I am just sending these messages to the debug console, I have also played with sending myself a Tweet, logging the data and triggering lights in my LEGO city to start flashing. In theory I could create a digital media board to customize a welcome message, or combine it with my hotspot captive portal flow to build up profile information.

In this example, I’ve pulled in the Meraki CMX node into my flow area. I then double clicked on it to bring up the local configuration.

The URL is going to be the end point where Meraki will send the JSON stream of location data. This will look like http://yourserver:1880/cmx2

The Credentials section will hold the configurations specific to your Meraki network. It will consist of a validator and a secret. The validator is used by Meraki to ensure they are delivering content to the correct system. They do this by first sending a [GET] request to your path. The CMX node will automatically respond with this validator key. If successful, the JSON stream will be sent as a [POST] message to the CMX node. The secret will then be used by the CMX node to verify the data is coming from the correct Meraki network. 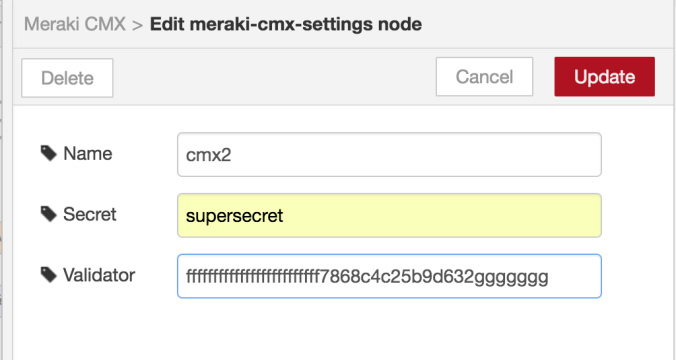 The CMX node is then connected to a switch node. which has two filters created, each representing a different output path. 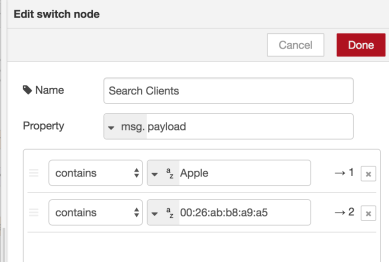 The first criteria looks to see if the msg.payload contains the word “Apple”, if so the message function node will be triggered to rewrite the msg.payload object with the string “Apple device found!”. 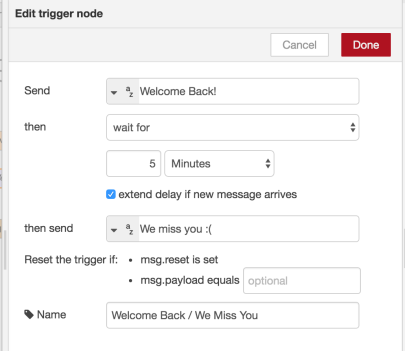 That’s it! I can now easily consume WiFi location information to trigger a workflow.

Since the JSON data contains GPS coordinates, among other things, I thought it would be fun to place this information on a map. To be fair, this front-end was largely ported from a CMX API demo project written with Ruby provided by Meraki. My primary task was re-writing the Ruby code with Node-RED. This involved storing the data into a MongoDB in the structure expected by the front-end code. The front-end will then present a Google Map that allows the ability to track all clients or a specific device. I then enhanced the data provided in the client info window and also allowed for a JSON export from the web page. I thought of many other ideas along the way… but I’m going to keep things simple for now.

This flow section will accept the JSON data either from the CMX node or by injecting sample data.

The “Format Client” function node iterates through the supplied JSON and maps it to a client object to be stored in the database.

I then use a function node, “build operation parameters: filter, update”, to prepare the MongoDB insert operation.

The MongoDB2 node was something I had to install additionally into Node-RED. It provides tons of options for working with a Mongo database.

You can install it just like the CMX node, by going to the ~/.node-red directory and typing the following.

A MongoDB database should be already installed and running for this flow to work. Installation instructions can be found here.

This flow section handles the requests made by the front-end page.

The [get] /clients route will perform a lookup in the database with a simple search query, msg.payload = {}, which is equivalent to find({}) in MongoDB. This will return all available documents within the database, which will be sent back to the client.

The [get] /clients/:mac route will accept a MAC address appended to the /clients/path, which is then parsed out of the params and then formatted in the following two function objects. Then a search for the specific client is performed on the database and returned to the client.

This flow section will deliver the webpage that a user will see in their browser. Creating this specific flow was a process in itself, starting with the basic chaining of “mustache” nodes, which I describe in detail here.

The core set of code is within that JavaScript mustache node. This is what I kindly borrowed from a clever Merakian. It basically utilizes the Google Maps API to place the supplied coordinates on the map and add information from the JSON data.

The CSS mustache node does the styling. (I’ve left that code out to stay on topic)

The HTML mustache node will then import the JavaScript and CSS information since they were set as properties of the msg.payload object.

I had to create a Google API key to append to the import script for this to not generate errors. The real HTML line will look something like this

In the browser, navigate to the path for your new website to see the results. 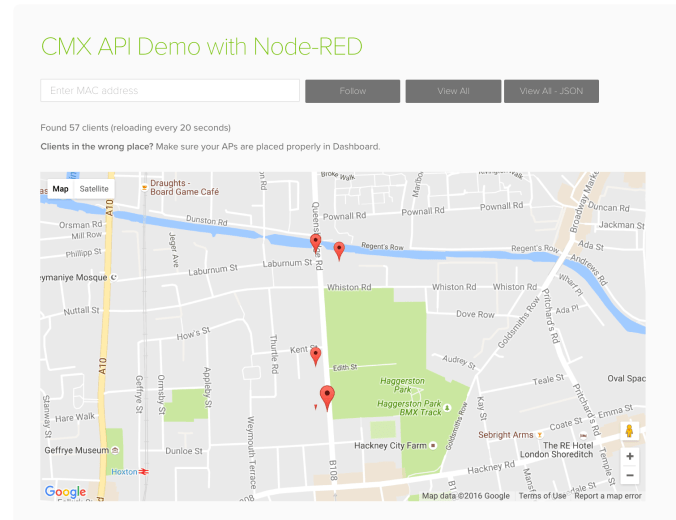 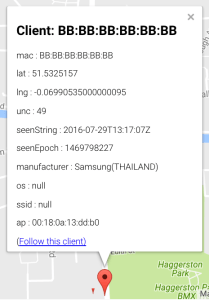 By using Postman or simply clicking on the JSON button, all of the data within the MongoDB can be exported. 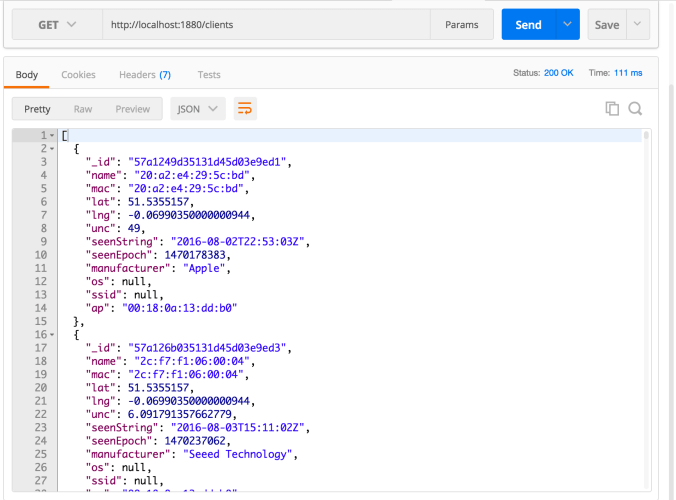 When thinking about IoT, sensors are one of the most important parts. By leveraging the Cisco Meraki CMX API, a huge amount of sensor data can be obtained that will enable location based workflows and analysis with ease.