After some months without posts, I’m going to continue this tutorial with some new projects… but first today I’d like to talk about a different library…

All the examples I wrote uses the Ethercard library by JeeLabs – in my first post I also explained how to install it in your IDE.

That library proved to be well written, stable and supported by the developers.

I found another library, also for the enc28j60 controller, named UIPEthernet (official page on Github). This library has the big advantage to be compatible with the sketches that are written for the official library.

The only change you need to perform is to update all the include statements, modifying Ethernet.h into UIPEthernet.h.

For example, load the WebServer sketch and change the include as explained before: 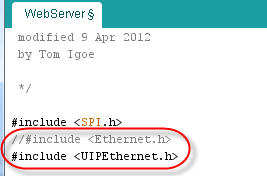 With that little change, the sketch compiles and works with your shield:

While using the library, take care of the hardware differences between the two ICs (W5100 e enc28j60) and remember that the latter uses some resources of the ATMega chip and therefore has some limits.

In particular, I found some sketches that doesn’t work (Arduino keeps resetting) because of its RAM memory is saturated… this happened for example when I was using the library to connect to a MySQL database.