The ATmega32u4 microcontroller, used on the Arduino Yun, has a serial port (PIN 0 and 1) connected internally to the AR9331 chip that runs the Linux distribution Linino:

Yun has also an USB host port, which can accept USB peripherals like keyboards, webcams… and also USB->serial adapters: 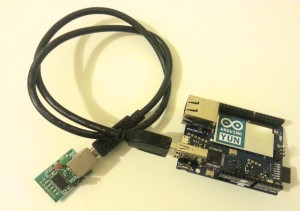 Choose an adapter based on one of the FTDI ICs, for example the famous FT232R:

Connect to the Yun via SSH and install the appropriate kernel module:

If you now connect the adapter and display the system messages (using the dmesg command) you can read that the adapter is correctly detected and a new serial port is added (named ttyUSB0 in the screenshot below):